Molok® plays on the olympic level

With thousands of young athletes gathering in the games, waste management was a major challenge. It was tackled using Molok Deep Collection containers.

Deep Collection containers were installed long before the thousands of guests arrived at the Olympics. Apart from Lillehammer, Youth Winter Olympic events also took place in Hamar, Gjøvik and Øyer.

-       Molok collection points were set up at the competition venues, as well as in the Olympic Village, where the young athletes were accommodated. This project was an excellent opportunity to spread awareness of Molok globally, Svein H. Strømberg adds.

The Youth Winter Olympics consist of seven different sports, such as skiing, tobogganing, ice hockey and slalom. In Lillehammer, there were participants from over 30 countries. 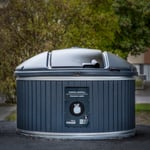 Read more on this topic